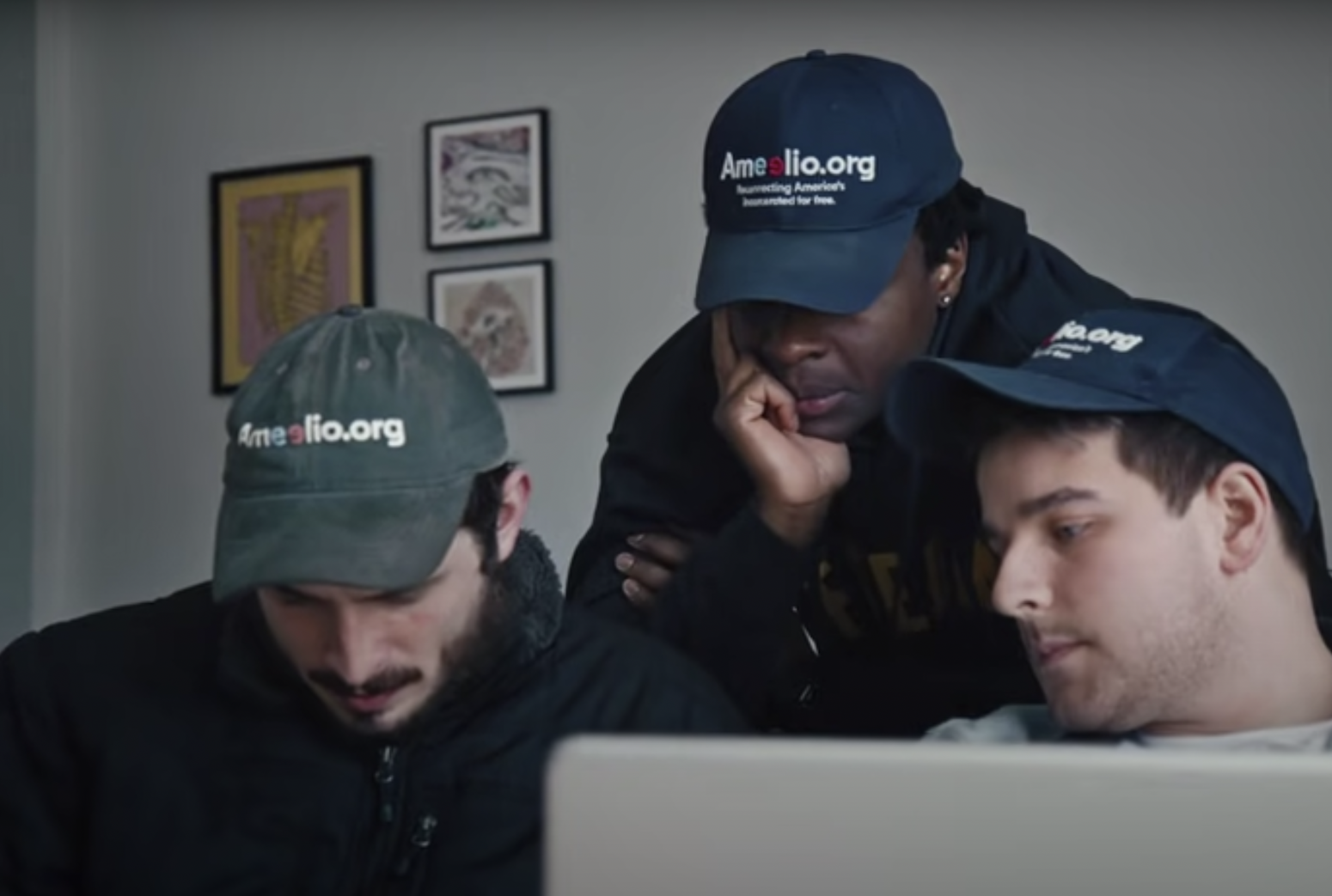 This story is first published on Freethink media on December 9, 2021.

7% of prisoners in the US will be rearrested within 5 years of their release.One of the biggest predictors of whether a recently released inmate will reoffend is how well they are  able to maintain communication with friends and family members.

Research has shown that the more contact a prisoner has with people in the outside world, the less likely they are  to re-enter the prison system after release. .

The simple solution to the high recidivism rate in the US would seem to be to increase a prisoner’s communication to the outside world. But the harsh, unfortunate reality is that prison communication is inaccessible for most prisoners and their families.

A third of inmates’ families go into debt just by staying in touch.

That’s why, in 2020, Yale students Uzoma “Zo” Orchingwa and Gabe Saruhashi founded Ameelio, an app that allows inmates and their families to call each other for free.

A non-profit taking on a billion dollar industry

“These companies are basically earning billions by charging vulnerable people in our communities. These companies have created an artificial industry. If we succeed, an entire business model is undermined,” Orchingwa told Freethink.

Already, the non-profit app has garnered funding from an all-star roster of investors, including Jack Dorsey, CEO of both Twitter and mobile payments company Square; Vinod Khosla, co-founder of Sun Microsystems and founder of Khosla Ventures; and Google executive chairman Eric Schmidt.

“There’s obviously no monetary return on investment for the folks who provide us donations. One of the most important things for me to do is to convince them of the impact,” Orchingwa says.

By helping prisoners stay connected with their personal and professional networks while incarcerated, Ameelio can help better rehabilitate prisoners and decrease recidivism.

The initial version of the app had one feature, Letters, that made it easier for people to mail physical letters to inmates. For a tech startup, it was a decidedly analog feature. But Letters solved a tricky problem for people trying to correspond with inmates: it can often be hard to find an inmate’s address. Letters automated that process. Users typed out a letter to an inmate on their phone, and the system automatically printed and mailed a physical copy to the prisoner — for free.

“One thing we heard that really moved us was from Richard Watkins, a recently released incarcerated person, and he said the greatest sound he heard each week was a letter sliding under his door,” Orchinga says. “Those letters coming from family were a ray of hope. That was an ‘Aha!’ moment for us.”

The app was an instant hit in app stores. As of this August, Ameelio was processing more than 100,000 letters and postcards per month, and it had reached nearly a quarter-million users. Not bad for an organization that had just $12,000 in cash holdings when it launched its first feature.

Letters was such a success that Orchingwa moved to Des Moines, Iowa, so he could work on Ameelio’s next big feature, a free video conferencing platform called Connect.

Connect broadened the scope of Ameelio. Whereas Letters enabled communication between an inmate and his loved ones, Connect would be a comprehensive prison communication hub. Prisoners could use Connect to speak with their legal representation or conduct online education classes — again, all for free.

Ameelio launched the pilot program for Connect at Iowa Correctional Institution for Women, a minimum- to medium-security prison in Mitchellville, just outside Des Moines.

If Orchingwa and Saruhashi wanted to, they could simply undercut the competition, charge families slightly less to communicate with their incarcerated family members, and thus enjoy multi-million dollar revenues. But instead, the founders insist on operating Ameelio as a non-profit.

“We are committed to never charging families of incarcerated people.”‍

That makes generating revenue difficult, of course. And in order to get the s Connect project off the ground, the nonprofit  had to be able to cover its costs.

“It was really stressful to figure out how we were gonna reach break even,” Orchingwa says.

Fortunately, the Connect pilot program was a runaway success — so much so that the state of Iowa commissioned Ameelio to implement Connect at all nine of its prisons. By charging the Department of Corrections, local jails and attorneys for access to Connect, Ameelio has found a model that allows it to break even and continue operating.

Success is not without its difficulties, though.

“My stress level has increased dramatically, and I don’t sleep much,” Orchingwa admits. “But this job has given me a lot of meaning.”

The impact cannot be overstated. Orchingwa was inspired to create Ameelio by his own experiences trying to correspond with incarcerated friends. Several of Orchingwa’s childhood basketball teammates have served time in prison, and Orchingwa saw firsthand how difficult it was to keep touch with them — and how the prisoners’ lives suffered when they were isolated from the outside world.

Orchingwa carries with him a photo of him and his incarcerated friends from a basketball tournament when they were kids, a reminder of the problem he’s committed to addressing.

“Regardless of the worst thing you’ve done, you’re not worthless,” Orchingwa says about people who are incarcerated.

Ameelio helps them remember that. 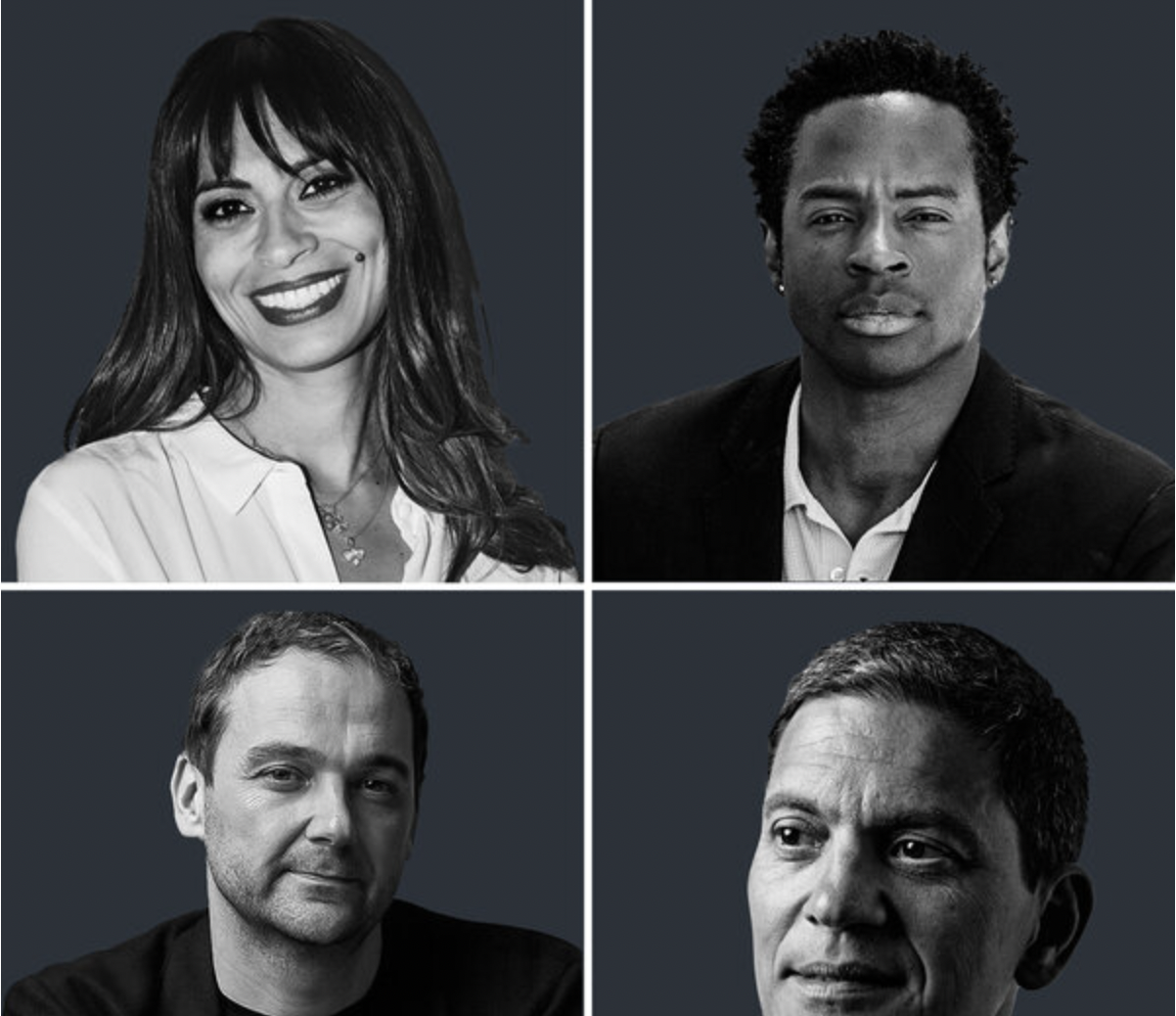 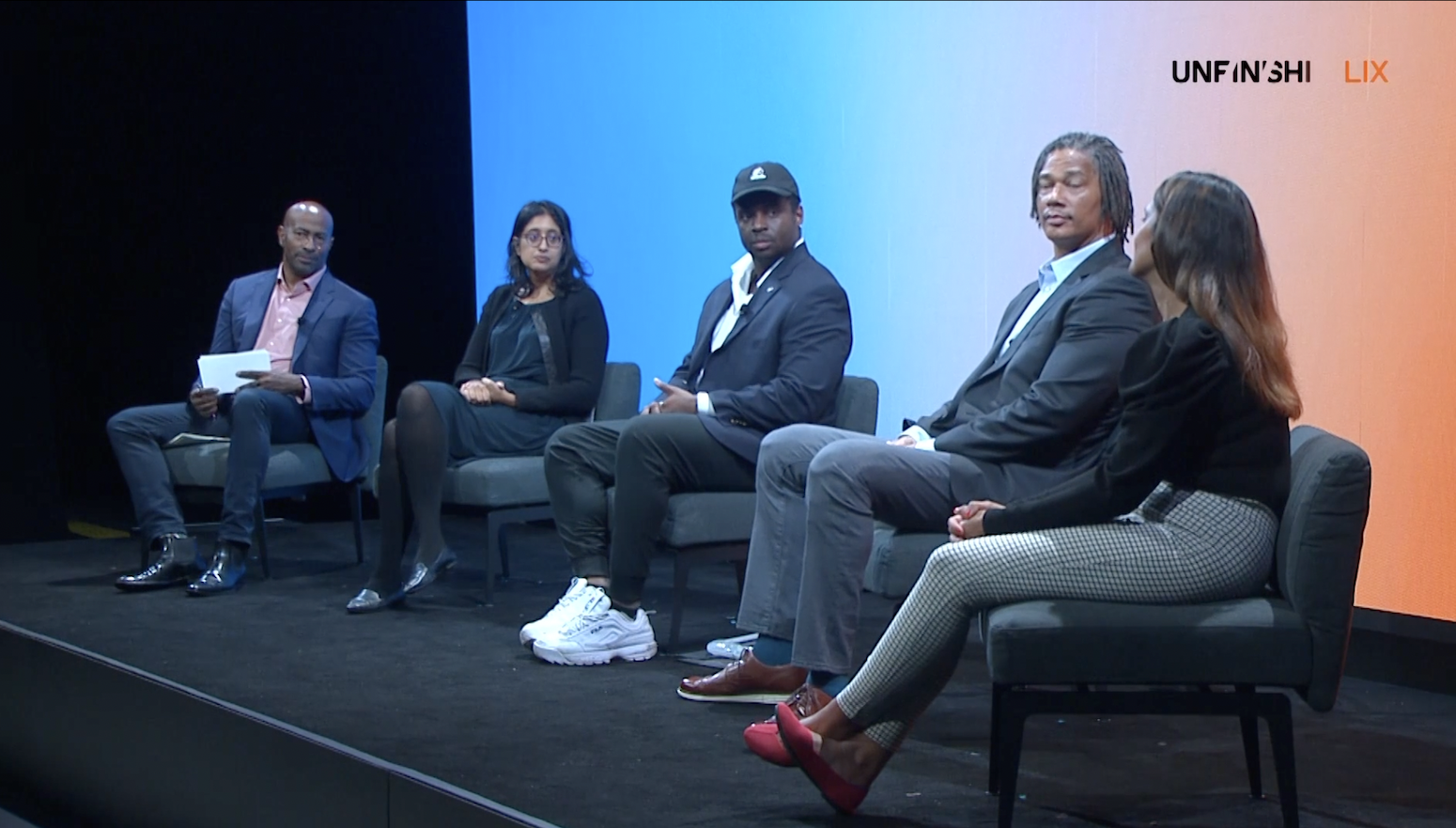 Our CEO, Zo Orchingwa, shares Ameelio's work from the stage of Unfinished Live 2022. 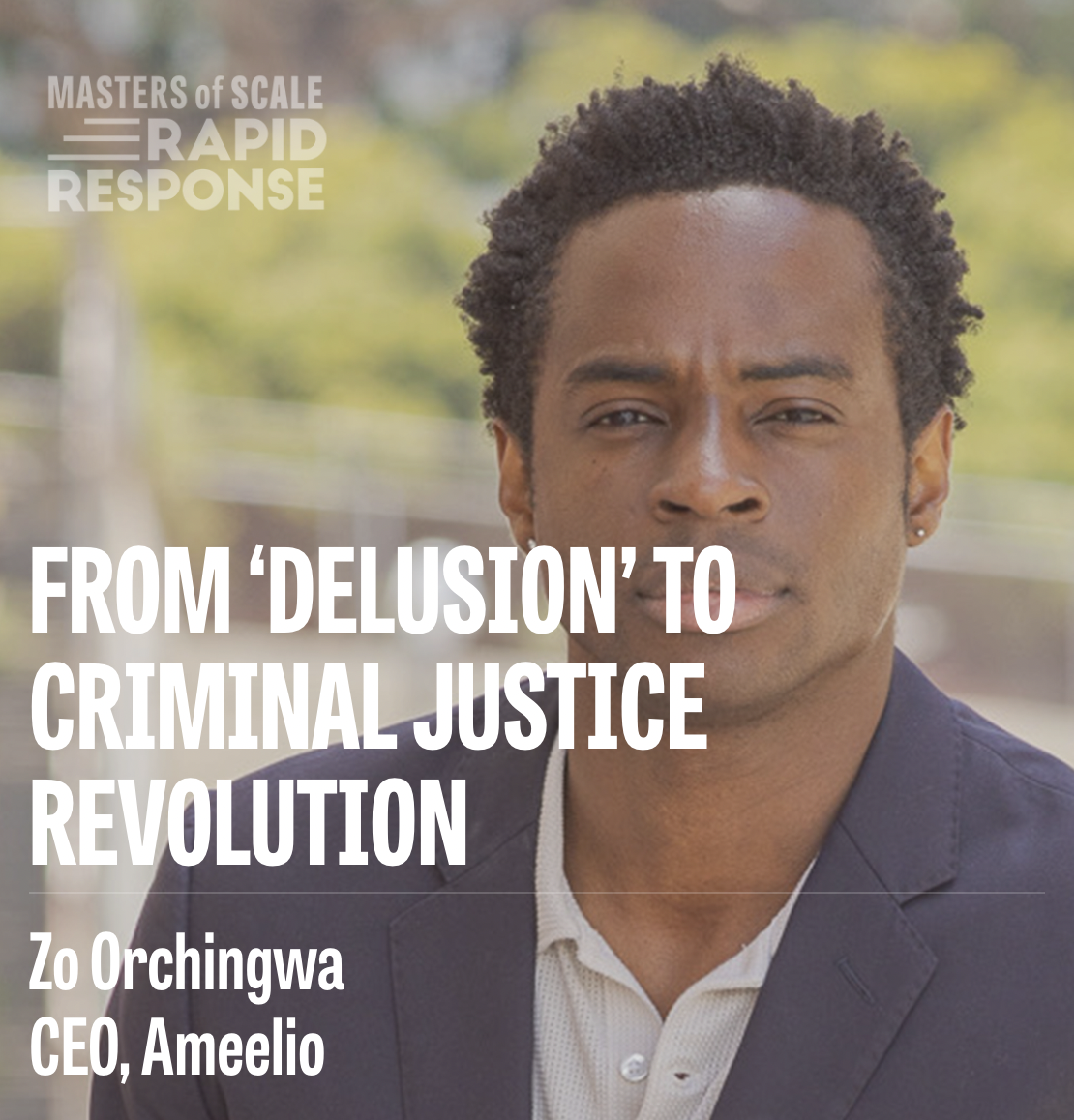 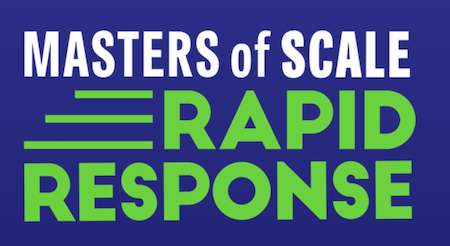 From "Delusion" to Criminal Justice Revolution

The Story of Ameelio, a conversation between Zo Orchingwa and Master of Scale podcast.